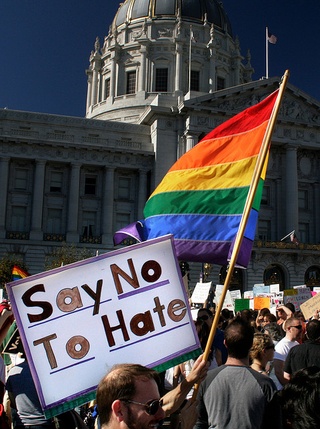 The Indiana version of the federal Religious Freedom Restoration Act has gotten far more attention than I'm sure its crafters anticipated. The pro-GLBTQ left excoriated Indiana as having passed a law thinly veiled to support individual bigotry against homosexuals and other non-heteronormative identities by invoking the tenets of religion.

Inadvertently caught square in the middle of this political and media firestorm were the owners of Memories Pizza of Walkerton, Indiana; a local television news crew interviewed the owners about the law, who replied that while they certainly wouldn't deny any customer in their restaurant service based on stated or assumed sexual identity, their particular faith would prevent them from consenting to cater a wedding between two non-hetereosexuals. Mind you, nobody had actually asked this small town pizzeria to cater any weddings - be they gay or straight - but the masses didn't let a little thing like that prevent them from losing their collective shit over this pizza joint's stance.

Enshrined in the First Amendment of the Constitution is the freedom of association. That freedom ensures that no person shall be compelled to engage with (or prevented from engaging with) any other person. This makes intuitive sense. I don't have to invite somebody to my barbecue if I don't want to. And I can't force somebody to invite me to their barbecue if they don't want me to. People who like each other are free to engage in business or personal relationships as they so choose, and people who dislike each other are free to decline any such engagement.

What erased this liberty from our collective memory and intution was the Title II of the Civil Rights Act of 1964, which for the first time compelled business owners of "public accommodations" to engage in trade with whomever sought to do so. Was this unconstitutional? Of course it was. Was it the right thing to do? With as much if not more fervor, yes, fucking yes, it was.

The freedom of association presumes that the actors in any particular exercise of that freedom have equal access to other options - to open their own business, to patronize another business, to make vocal public outcry about a particular social transgression. In 1964, there was no such equal access. Racism had poisoned institutions so very thoroughly that non-white citizens enjoyed inequal protection from the police, inequal application of municipal codes regarding business licenses or health inspections, inequal access to capital from banks or other lending institutions, inequal access to every single public and private service that might allow for the conditions that ensure freedom of association is a feature and not a bug.

Do gays suffer the same complete and thorough injustices now? No. Not by a long shot.

I'm certainly not saying that gays enjoy just as much privilege as straight people do - they don't, and we shouldn't stop working on that problem until they do. But the results of Memories Pizza's interviews hammer home with a fucking wrecking ball how completely different 1964 was for blacks and 2015 is for gays. What was the minority voice crying out for gay rights is now the majority voice. Keep in mind, this happened in Indiana, a state where it's legal for gays to marry - not one of the 13 states that still deny non-heterosexuals that freedom.

Memories Pizza is now going out of business based on the torrent of hatred, vitriol, and bullying they received through phone, email, and Yelp reviews - from ordinary citizens who have never even been to Indiana to national political figures who as recently as a year or two ago were still actually against gay marriage.

Governments and majorities don't have rights; they have powers. Rights exist to protect the minorities against the tyrannical bludgeon of the self-rightous majority. Indiana's RFRA ironically is needed to protect what is now a minority - those bigoted assholes who have every right to refuse to associate with those with whom they disapprove of. And we, the pro-love, pro-equal-right, leave-me-the-fuck-alone'itarians are now the majority.

So I say to you, my fellow equality and love seeking friends, we were ridiculously bullying to this pizza shop and to Indiana. We were self-righteous and conceited to presume use our majority cudgel to bludgeon the minority. We rejected, harassed, and threatened these people on the basis of who they are and what they believe - which ironically is the very thing we're fighting against.

Freedom of association is a good thing. It allows people who want to beat the living crap out of one another to just walk away, and it allows those who see eye to eye to shake hands and develop comraderie. Let's honor our freedoms and disagree like decent human beings. Maybe that's the very example the bigoted assholes need in order to consider our point of view.