Why campaign finance reform is doomed to fail 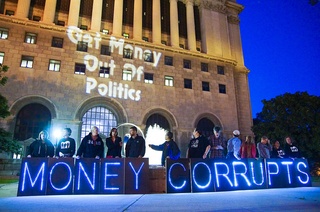 The Supreme Court decision in Citizens United v. FEC prompts my liberal interlocutors to start frothing at the mouth. It's clear to anybody of any political bent that the very cozy relationship between big business and big government corrodes our republic, that the channeling of money and favors to lawmakers and decision makers merits labels like bribery and corruption. But I don't see the Citizens United decision the way they do.

The ever-useful SCOTUSblog summarizes the findings in that case as:

Political spending is a form of protected speech under the First Amendment, and the government may not keep corporations or unions from spending money to support or denounce individual candidates in elections. While corporations or unions may not give money directly to campaigns, they may seek to persuade the voting public through other means, including ads, especially where these ads were not broadcast.

Money is speech. This shouldn't be a controversial thing to argue. In order for anybody to engage in mass public discourse, it costs money to disseminate that speech. I have to pay money to host this blog. A yard-sign or bumper sticker costs money to manufacture. A television commercial costs money to air. Giving money to candidates or political organizations to support their ability to speak is a way of voicing your support for that speech.

The hard part comes from the balance of interests and consequences. Money is speech, and no amendment of the Constitution carries stronger wording of prohibition than the First Amendment: "Congress shall make no law..." However, the people have an interest in preventing government corruption, even the appearance of corruption - which is why the Citizens United decision still prevents direct contributions to candidate campaigns by corporations, be they for-profit or non-profit.

At the end of the day though, the reason my liberal friends want to see Citizens United overturned is that with the extreme aggregation of wealth into mega-corporations and the ultra-rich few, well-monied voices get to carry more weight than others, which seems antithetical to a democracy and to the free-market of ideas. (They also, wrongly, believe that corporations may now give unlimited funds directly to campaigns, but no matter.) Their argument isn't hard to sympathize with, as we watch the 2016 Presidential candidates jockeying for the support of the politically-spendy billionaires whose support can make or break a campaign out of the gates.

Those liberal friends go from that easy-to-sympathize-with premise to the conclusion that if only we could make such campaign contributions illegal, that ability for the mega-wealthy to corrupt would be contained. In true liberal fashion, there ought to be a law. If we could just come up with the right law, it could work. It is here I differ in opinion strongly from them.

Let's say you could craft a law directed at for-profit and non-profit corporations that limited spending in such a way that didn't violate the First Amendment (I don't think you can, but let's grant that for the sake of argument). Or let's say you manage to get a Constitutional amendment passed that rewrites the First Amendment (I think that's an atrociously horrid idea and luckily never likely to happen). Even then...

You'll still never, ever, ever stop the torrential flow of money from finding its way from wealthy interests into politicians' pockets.

You should probably know that I have two basic postulates about our republic. Neither, I think, are terribly controversial but if you disagree with either, we're not going to agree on many, many things.

These two postulates create a positive feedback loop. As government accrues more power and influence, how they direct that power and influence changes markets in bigger and bigger ways. That makes it extremely lucrative and profitable to spend money ensuring that power and influence directs markets in ways that established companies can benefit from, so the wealthy, powerful, and connected have great incentive to lobby and court the favor of lawmakers and rulemakers in government. The increased willingness to spend money on and court favor with politicians and bureaucrats creates an incentive for the power hungry to seek office and high administrative postings. The loop then recycles.

It's truly mind-boggling to consider the sheer size and comprehensive magnitude of the apparatus that sustains and feeds off of this feedback loop. Political parties, lobbyists, corporate executives, investors and shareholders, mainstream media, unions, and government employees all benefit from and desire to sustain this system. Ultimately, the system relies on one thing continuing to be the case: no matter who wins any given election, the system will prevail so long as it's a Republican or a Democrat.

It really can be that simple. Much as the profit-motive for companies can ethically constrain a company because pissing off customers results in less profit, politicians' power-motive can be ethically constrained if they actually fear losing office because of pissing off constituents. But between gerrymandering of districts, laws crippling third parties from growing, and other exclusionary tactics, the two parties have successfully eliminated that fear - we have no other viable option. No matter who is in Congress or in any particular statehouse, Democratic and Republican majorities rise and fall, each taking their turn to sell their power and influence to those who can profit from there being more power and influence to sell. And when the American people get fed up with those in power, the pendulum will swing back to the other party - and the recently deposed party merely has to sit and wait until America's bi-polar disorder oscillates once more next election cycle.

And both parties have identified extremely skillfully what issues will disproportionately capture the outrage of their politically passionate constituencies, and they use these flamebait issues to dominate the public discourse the way a magician diverts his audience's attention while performing a trick. Science vs. religion, pro-choice vs. pro-life, gay vs. "traditional" marriage, open carry vs. gun control, green energy vs. fossil fuels. and so forth. All of these are meant to capture our attention, our CNN coverage, our Facebook posts.

This polarization of our public discourse over these issues is part of the positive feedback loop. When government accrues more power and influence, the laws they pass, even if the legislative vote is split 51/49, affect 100% of us. The stakes get higher and higher the more that power is centralized, and we, the people, spend more money on political action to ensure that our will is imposed on everybody else instead of their will imposed on us. Meanwhile, in the 1,000+ page trillion dollar omnibus spending bills, the real business of government takes place: the rewarding of monied interests for their financial support and fealty to Washington.

So the sad reality is that no matter how well intentioned or what lofty ideal catalyzed the creation of a law or rule, the time any of them see the light of day on the President's desk, that apparatus will have had its say, and rest assured that everything in that final resulting law or rule will be supportive of greater government power and greater corporate profit.

Federal, state, and local governments together spent $6 trillion last year - more than 1/3 of the nation's gross domestic product. That's almost $19,000 for every man, woman, and child in our country. With the evisceration of the commerce clause, how our government chooses to spend it and what rules they place around markets have the potential to decide the winners and losers in any industry. Big toy companies can get the government to put in place lead safety standards so onerous and expensive it secures their market dominance against competition. A trade group representing chiropractors can make it mandatory that health insurance plans in the state include chiropractic coverage, guaranteeing a bigger market for themselves. Industries like alpaca farmers can get the government to subsidize them, ensuring every American pays them pennies, amounting to millions upon millions in benefits. Multiply these examples by a million, and you have a sense of the size of this leviathan.

Companies, industries, and livelihoods all depend upon the government's largesse to ensure their continued success - which is why they spend billions on Congressional races and further billions on the Presidential races. Furthermore, companies who do not have to keep their customers happy in order to be profitable businesses can continue to thrive despite poor customer service and unethical behavior. It's no coincidence that the industries with the lowest customer approval ratings are the most highly regulated, limiting the entry of any competitors - e.g. cable/telephone companies, airlines, insurance companies. The incentive is extremely high and the return on their lobbying and campaign contribution investment is enormous.

Do you really think any law you could pass could override this incentive?

There's just too much money to be gained by affecting government power and spending to your advantage, and the very people tasked with writing the law are the ones whose power and influence you're expecting them to stop selling. Realistically, campaign finance reform laws send the flow of money underground, and, even if the legality is murky at best, every incentive exists to continue find new ways to continue that flow of money, certainly far faster than any law could be amended to react.

That flow of money, like water, will find the path of least resistance to get to its destination. The best case scenario we can hope for is to have that flow of money change hands in the daylight where it can be reported and publicly scrutinized, and if that's the path of least resistance, that's the path money will take. If it's underground, government still gets bought and sold - we simply have no idea by or for whom.

So long as government controls as much money and power as it does, there exists an enormous incentive to spend money to influence how that money and power are employed. Corporations, unions, and lobbies will all play along, and the more they do, the more those who seek office will be those who wish to be the ones with the money and the power. So long as the two parties maintain a stranglehold on our choices in the election booth, this system will continue. Reversing Citizens United could only make it worse.