Why everybody should be angry after King v. Burwell 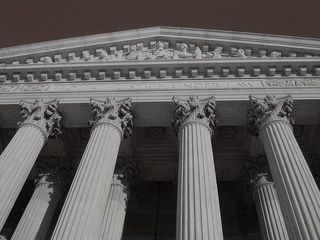 This morning, the Supreme Court decided King v. Burwell, the second legal challenge to the PPACA, aka ObamaCare, that the highest court in the land has heard. Again, the Court upheld the law, and again Roberts penned a head-scratcher of a majority decision.

For those unfamiliar, the challenge revolved around the wording of the law that authorized the IRS to give tax credits to poor people who bought health insurance through "an Exchange established by the State." The word "State" is capitalized because in such legalese, it refers back to a section of the law where definitions are given, and in this case "State" means the fifty states and the District of Columbia. The plain wording appears to support the plaintiffs, but if the plaintiffs are right, the entire PPACA falls apart; most of the states did not set up their own exchanges. The majority sided with ignoring the plain language in favor of the least disastrous consequence.

I'm not a lawyer. I'm an engineer. But I love the law because the entire apparatus is so similar to computing systems. Laws are software, written line by line, complete with language goodies like declarations of constants and variables through definitions, pointers to other sections of the law, and patches to existing law with diff-style syntax. Congress is the QA process. The President signing the bill is the user-acceptance. And its implementation is compiled and interpreted through government administration. The court system exists to handle exceptions thrown and debug problems, giving us post-mortems and core dumps for runtime errors. It's a really tidy metaphor.

Compilers and kernels are intentionally not given room for interpretation or inference. They have to precisely follow the code they're given, which is why legalese is so exacting, so meticulous, and so explicit. And whether you believe in healthcare mandates or not, whether you think the PPACA was the correct approach or not, there's a huge, gaping problem in our jurisprudence introduced by this majority decision. We're at a place where our compilers and kernels are having to figure out how to run buggy, ambiguous code without crashing. That's not a job I want my judiciary, the compiler and kernel of my legal system, doing for me.

The language of the PPACA refers to "an Exchange established by the State" for state-run exchanges, "an Exchange established by the Secretary" for the federally-run exchange, and "an Exchange" sans-qualifier for either. A compiler reading that code would have no room for interpretation, no ability to say "the developer must have meant this other thing instead." I don't want my computers guessing I meant something other than I said, and we as the people definitely don't want our courts to do the same with laws. But the majority opinion does just that; it grants that the plain language of the law refers to only state-run exchanges but decides to ignore that because that clearly had to be a bug in the code.

There's a tremendous danger in crossing that line, especially judicially. The dissent points out: "Adopting the Court’s interpretation means nullifying the term 'by the State' not just once, but again and again throughout the Act... It is bad enough for a court to cross out 'by the State' once. But seven times?" With as much anger as we have surrounding complaints of judicial activism, opening this door is frightful, no matter your politics.

Here's the underlying problem: the PPACA is a shitty law, and I don't mean shitty policy (a totally different question). I mean it's a shitty law in the way that Windows XP was shitty code. It was really, really badly written. The majority completely agrees (citations removed):

Petitioners and the dissent respond that the words “established by the State” would be unnecessary if Congress meant to extend tax credits to both State and Federal Exchanges. But “our preference for avoiding surplusage constructions is not absolute.” And specifically with respect to this Act, rigorous application of the canon does not seem a particularly useful guide to a fair construction of the statute. The Affordable Care Act contains more than a few examples of inartful drafting. (To cite just one, the Act creates three separate Section 1563s.) Several features of the Act’s passage contributed to that unfortunate reality. Congress wrote key parts of the Act behind closed doors, rather than through “the traditional legislative process.” And Congress passed much of the Act using a complicated budgetary procedure known as “reconciliation,” which limited opportunities for debate and amendment, and bypassed the Senate’s normal 60-vote filibuster requirement. As a result, the Act does not reflect the type of care and deliberation that one might expect of such significant legislation.

What do we do when Congress has so utterly failed at its job to deliver usable, executable lines of social code?

Affirming the Fourth Circuit opinion and preserving the IRS' interpretation of the PPACA alleviates immediate catastrophe but creates a hurricane of pain in American jurisprudence down the line. I don't know if that's the right call or not. But I do know that I'm really angry at Congress for writing such crappy legislation, just as I'd be furious at one of my engineering teams if they delivered something so terribly conceived and written. Whether you like ObamaCare or not, you should be unhappy about King v. Burwell - not the decision itself, but that we even had to make it.